If you’ve got a stack of cardboard boxes lying around and you’re looking to make a fun project out of it, I’m going to show you how to build a simple, working pinball machine with just cardboard, rubber bands, disposable chopsticks, and glue – no electronics required!

Decide how large of a cabinet you want for your pinball machine. For me, I had a nice ~18×12″ box lying around and used part of the lid as the main playfield where the ball will roll on. On the inside walls of the box, glue some thick supporting structure so that your playfield can rest on it comfortably. You want the playfield to have about a 6° incline, but do what feels right for the ball you will be using. I bought some 3/4″ steel bearing balls and rolled them up the ramp and adjusted the placement of the supports until the fall speed felt natural to me. Don’t glue the playfield down yet, we’ll want to have easy access to its back so we can construct the hidden mechanisms for the flipper. 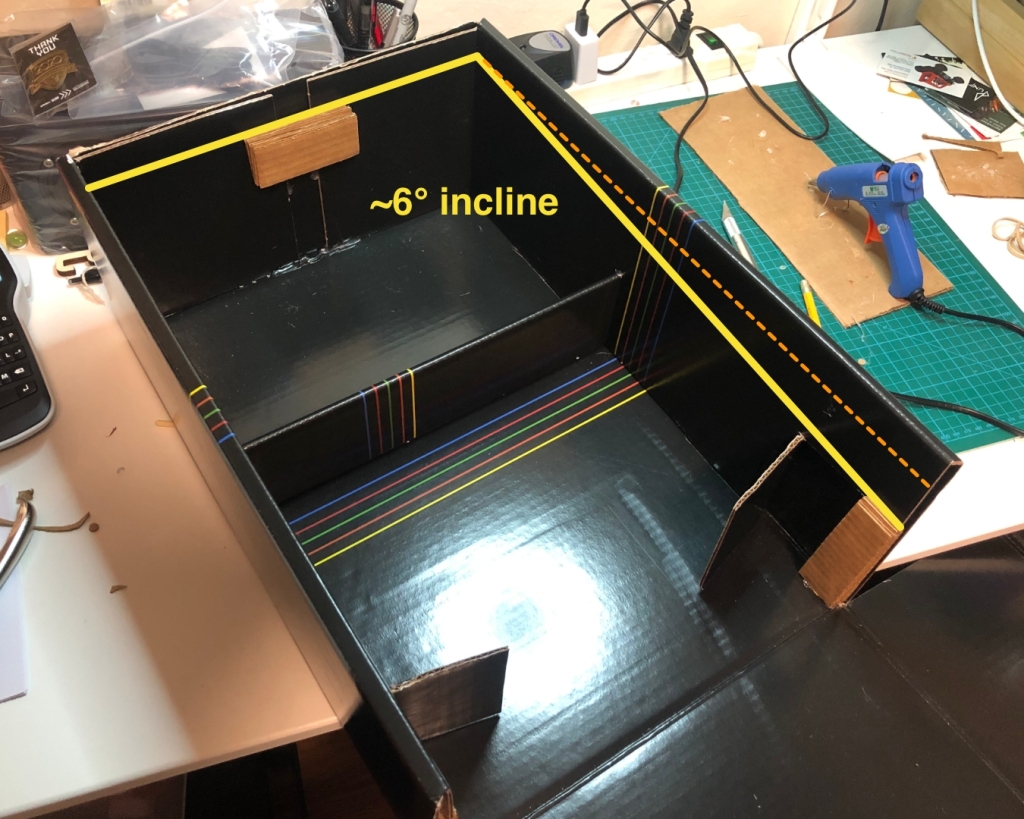 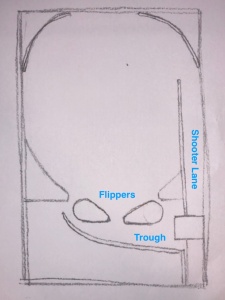 Sketch out a rough idea for the general size and placement of the flippers, trough, and shooter lane. Try to figure out how large your flippers need to be for your playfield keeping in mind that you’ll need adequate space between them for the ball to fall past and into the trough.

Identify where the flipper’s pivot point is for rotation and punch a hole there consistently in all of the cutouts except for one – this will be the topmost cover. Glue all of these down onto each other making sure the holes and edges are lined up. Now push a dowel/chopstick/pencil through the holes until it reaches the cover and glue it down tight. (Repeat these steps for the other flipper.) 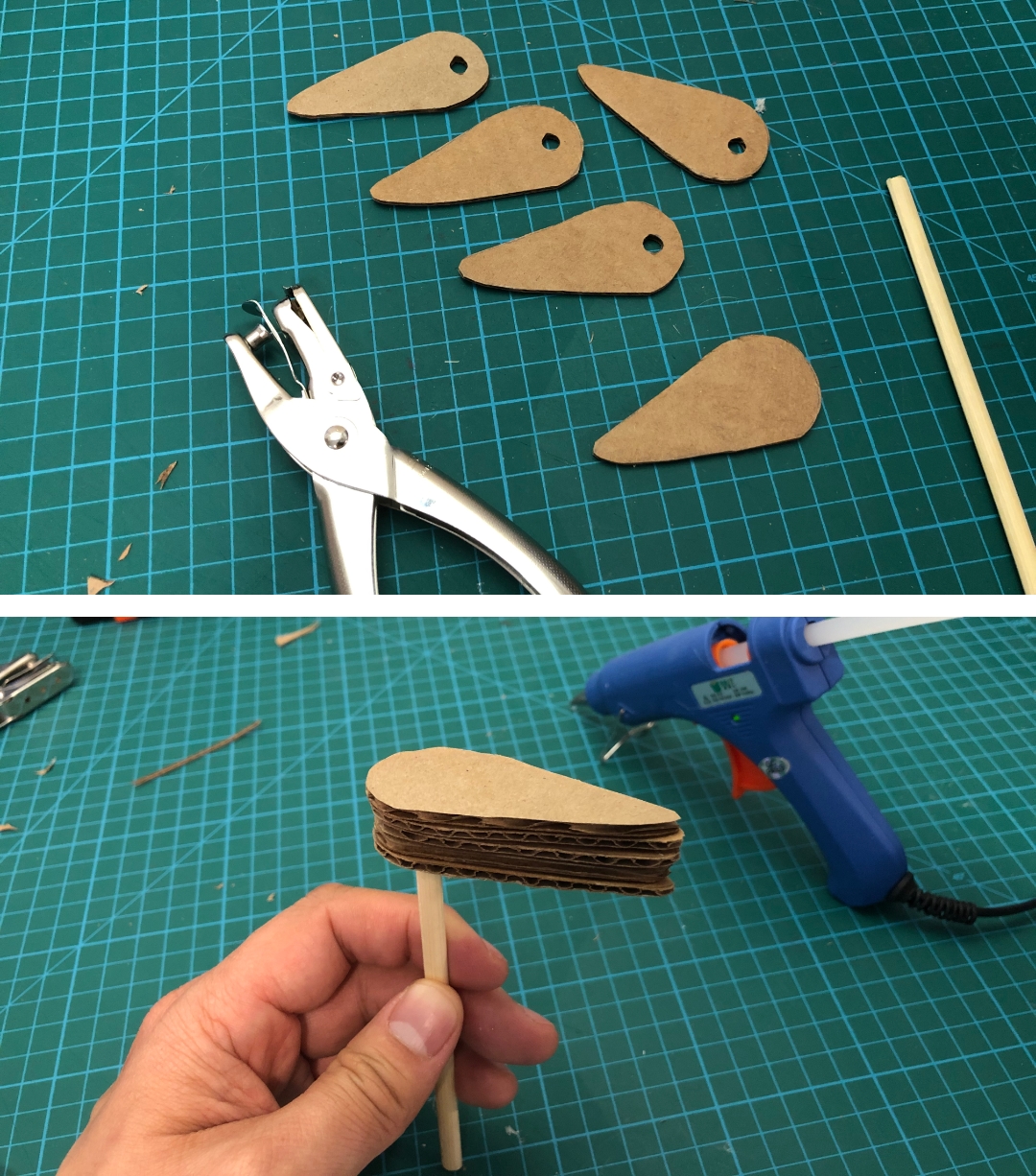 Now construct a button with the same multi-layered cardboard approach and cut its length to best fit how far  it needs to slide in to push the flipper to its maximum rotation. Once you’ve found that sweet spot, construct a holder to constrain the button’s movement along a straight path in. I used a single piece of cardboard shaped to form a tunnel of sorts and glued the ends down.

Now securely glue down another piece of chopstick to the base of the holder. I did this by creating a stack of 5 pieces of cardboard and punched a hole for the chopstick to sit in and liberally glued it all down. Attach a rubber band from the holder to the flipper extension and create caps at the end of each chopstick with glue to prevent the rubber band from sliding off on its own. Now when the button pushes the flipper extension away, the rubber band will pull it back towards the holder and rotate to its default position. If everything works as intended, repeat this step on the other side for the second flipper. Place the playfield back onto the cabinet and cut holes into the sides of your box to sync with the button placement. 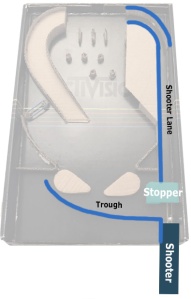 To avoid getting in the way of the flipper mechanisms behind the playfield, the shooter will be placed above. The shooter will use a similar technique of using a rubber band to return the shooter to its default position – launching the ball in the process.

Before we do that, let’s first define the walls that will usher the ball from the trough through to the shooting lane. I’ve highlighted these essential walls in blue. To build these, cut a long, single layer of cardboard (that’s at least the height of your ball) and glue it down directly to your playfield to create these walls. When the ball falls into the trough, we want it to naturally roll all the way to the right and rest against the shooter in its default position. When the shooter is pulled down, the ball should roll further to the right and be ready to be shot up through the shooter lane.

Next, construct the Stopper. Craft this to be shaped like an upside down “L”. The purpose of this piece is to be an immovable attach point for the rubber band. Glue down a piece of chopstick to hang down above the shooter lane. Make sure there’s a comfortable amount of space between the playfield and the chopstick to clear the height of the pinball. Layer on additional pieces of cardboard to the base of the stopper to increase its height if necessary. Once you’ve settled on its height, loop a rubber band around the chopstick and secure it down with a generous amount of glue.

Next, construct the shooter. Cut a rectangular shape from layers of cardboard that will be long enough to extend past the bottom of the cabinet when at rest. Punch a hole at the center top of each layer of cardboard and glue down a piece of chopstick. Loop the rubber band around and build up additional cardboard structure to house the chopstick. This top piece serves a few purposes:

With the flippers and shooters in place, you’ve got all the fundamental parts completed and it’s now time to be creative! Add some interesting obstacles and goals – construct bumpers, walls, ramps, holes or… a secret cave that activates multi-ball mode! Go nuts and have fun makin’ 🙂 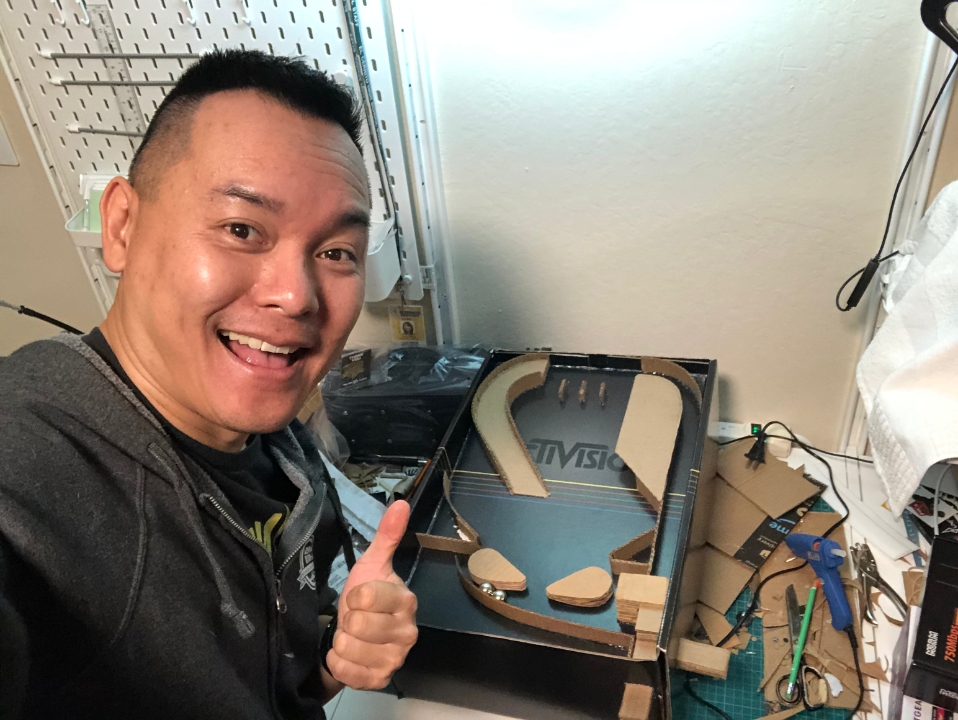 I like to make stuff. Sometimes I share the ones that aren't disasters. View all posts by Paul